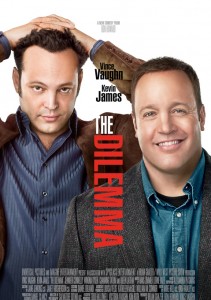 A buddy comedy/drama starring Vince Vaughn as Ronny Valentine and Kevin James as his best friend Nick Brannen, The Dilemma centers around Ronny and his problem. The thing is, Ronny has discovered that his best friend’s wife, Geneva (played by Winona Ryder) is cheating on him with a tattooed-up miscreant, Channing Tatum. So Ronny faces a choice: to tell or not to tell.

The usual dilemma is compounded by the fact that the duo is trying to sell a “manly” electric engine prototype to a large car company. While Ronny is the business brains of their venture, Nick is the car genius who is already stressed from trying to make the working prototype to meet a strict deadline. Thus Ronny’s problem becomes even more complicated. If he tells Nick about his cheating wife, he might not finish the engine and then their venture, for which both have staked a lot of money, will be sunk.

Vince Vaughn and Kevin James in their roles as best-friends-since-college are believable. Even Jennifer Connelly as Ronny’s girlfriend Beth who sticks by Ronny throughout the issues of the film is convincing. The issue comes from Winona Ryder’s character of Geneva. The acting itself is not the issue; Ryder acts the part well. The issue comes with the script writing. It is a bit difficult to swallow Geneva’s niceties with her heartless discussions with Ronny about her affair. The climax scene especially and the character’s reactions seem a bit strange.

As for the events of the movie, 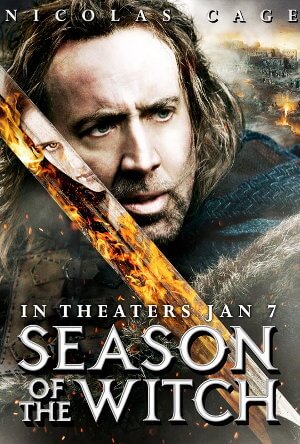 Nicolas Cage is a controversial actor. Not necessarily because of any “racy” nature that his roles might have, but because of the unpredictability of his acting quality and the ultimate success (or failure) of his movies as of late. And lately it seems, he has gone on a “long-haired-guy-with-life-experience-and-a-good-heart” streak, first with The Sorcerer’s Apprentice and now Behmen in Season of the Witch. But enough about Cage!

The movie begins with the execution of three supposed witches in the 11th century. It is a sad time for everyone in the audience as 21st century sensibilities take over. (Witches? What witches?) It seems those bastards chose women who did not conform to society to blame for all their troubles, most of which were probably caused by the rarity of bathing. It is clear that the message now stands to be this: religion is bad, look what they used to do to women!

But then the plot takes a twist

Watch Movie Online Without Downloading Anything

Have you ever spent lots of money and waited in a long queue just to watch your favorite movies in the cinemas? Why not try to go online? With the advance technology today, everything can be done online including watch movies.Â Â  Keep reading for more …

James Bond is back – again! – in the rather oddly named, but eagerly anticipated QUANTUM OF SOLACE, to be released on Friday,…

Mamma Mia! was a rather delightful comedy/drama. Of coarse people that do not enjoy ABBA will disagree but it really all depends on your taste in music. The movie is about Sophie, a young woman who is about to get married in her home in Greece. She wants her father to give her away but trouble is, she does not know who he is. Her best guess is three men from her mom’s diary. So, she mails three wedding invitations pretending they are from her mom. Trouble ensues when all three come to Greece but Sophie’s mother, Donna, does not know that they were invited by her daughter.