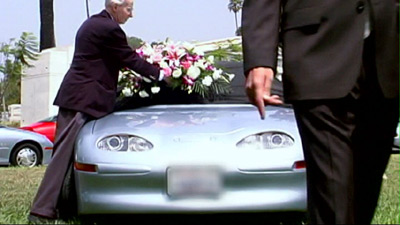 This is the first review of a documentary movie here but I felt compelled to write it after watching it last weekend. The movie tells a sad story about the rather unusually short life cycle of this particular vehicle – EV1 by General Motors. It is probably the first car in history that was honored with a funeral ceremony attended by a crowd of loving owners. They intended to keep the car in production after the manufacturer announced shutting it down and, ultimately, they failed.

You’ll see some familiar names – Mel Gibson and Tom Hanks among them- speak approvingly of the car and you’ll hear stories about long waiting lists and lessees forced to give the cars back that sounds like a car salesman’s dream. Yet after 9 years after production began the only car left is in an automotive museum and it is said to be specifically “disabled” by the manufacturer.

If you were asking yourself “why” some twenty times during watching this 40 min movie, you are not alone.

The vehicle itself would be rather unimpressive visually (by todays standards, anyways) if not one little detail about its design:

It did not need gasoline to operate. Not a drop of it. 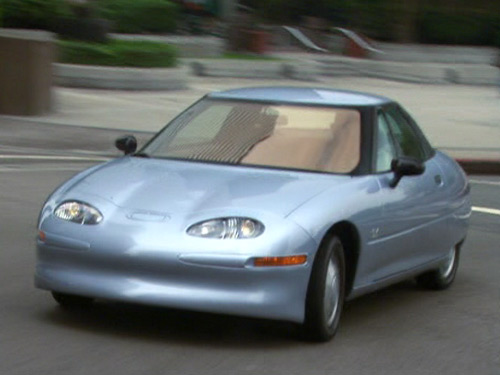 The only propelling force of the vehicle was electric charge. Just like the golf cart except this car was able to go 80 miles per hour (limited by on-board computer). You would charge it at home and then go to work next morning provided the place of work was not further than 55 to 75 miles away.

Granted, the car itself was far from perfect in any respect. However, common sense would be to expect that from the very first model of a revolutionary (in modern times – in fact electrical car concept itself is older than internal combustion engine one) type of vehicle. Also, it would be pretty logical to expect the manufacturer to be able to come up with a few subsequent models that would rectify the problems found in the first one. 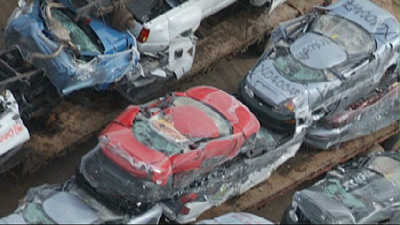 You would also expect the manufacturer to keep quite a few of the produced cars around at least to learn from the mistakes if for no better reason. However, this snapshot from the film shows the fate of the last 70-some cars in March 2005 – all crushed, only one (I think two – there should have been an exemplar in Smithsonian) remained in a museum, allegedly “disabled” as a part of the deal by GM.
None of what you would reasonably expect happened, which made a perfect conspiracy story for the movie. I guess, conspiracy is probably not a good word to describe it simply because the most of the players and stakeholders in this weird story were operating very much publicly. Yet their actual motives might have been different from the official story and this it what the creators of the movie, directed by Chris Paine, set out to prove.

Anyways, this was supposed to be a movie review and not a sales pitch for an electrical car… No, wait, you can’t buy one as none are available (picture above)! 🙂
I think the movie does a good job of not completely falling into the conspiracy theories category as the authors are trying to find reasonable explanations for the demise of this and other electrical cars by other manufacturers developed around that time. In the end the conclusion is made that many parties, including us, consumers, are responsible, so it would be unfair to say that the authors had only political agenda in mind. And still, in the story that goes about oil, state mandates, automobile manufactures and consumer interests it was impossible to not touch upon politics, so be prepared to hear some critique if current state of energy affairs looks all right to you.

Nice and entertaining documentary, definitely worth cable on-demand order and less than an hour of your time.