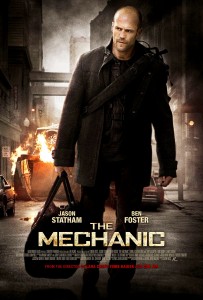 Statham is Arthur Bishop, most likely the best of the best at his job. He works for some evil company that specializes in assassinations done in a specific way, whether it be an “accident”, a shooting, a rival gang, or what have you. So one day, Bishop receives the order to kill someone he knows, his mentor, in fact, played by Donald Sutherland. Some moral qualms later, Statham, shoots Sutherland, who is in a wheelchair, by the way. This was a surprising moment in the film because I was not quite sure if Statham would carry out the hit in the end. Until he shot the man that is.


The rest of the plot has more to do with Sutherland’s washout of a son, played by Ben Foster. Perhaps out of guilt, Statham takes the son under his wing and teaches him the art of killing people. Foster, of course, has no idea that Statham is the one that shot his father, so everything is just fine and dandy as the two complete several jobs including a pedophile and a cultist leader guy. But lo and behold, there is a conspiracy afoot! This plot twist was not unforeseen. The company Statham works for betrayed him! Oh noes! Because this is totally not ok with Arthur Bishop (Statham), he goes on a mission to kill the head of the company, with Foster in tow.

The Mechanic is a remake, one which I have not seen, and therefore can not compare the two movies. The plot, remake aside, is not too original, in fact, it resembles Bangkok Dangerous in some ways (assassin trains a younger man and the two go on killing jobs together only to get screwed over by the guys that hired them). And the “surprising” plot twists can be described solely by my use of quotes. There was one twist at the end, however, that was fresh and really well done, but I will not mention it due to SPOILERS and all. Though I might seem critical of the script and some of its predictable turns, it is not bad, it is actually really good. Why? Well, because it was carried out really well, for one thing, and for another, it was expected of the film. People want to see movies about assassins that turn good after they are screwed over by some corporation. And it delivers.

As for the effects, they were well done. This is not surprising considering that Jason Statham is in this movie. As with most of his films there are explosions, guns, and fighting (with the notable exception of his little medieval epic, In the Name of the King: A Dungeon Siege Tale, which actually had swords and not guns). The fights were well choreographed and the explosions were sufficiently large.

Sh!t is going to blow up.

My love of Jason Statham is perhaps limitless, it is true. He is a man made of awesome but my only gripe with him is that he essentially plays the same character in various occupations (except in Gnomeo and Juliet, but that’s a film where he did a voice over, so perhaps it doesn’t count?). He is the go-to guy for a “doer”, a man that can kill people with his bare hands, most likely while wearing a suit, who has a good heart, a sense of honor, and one clearly capable of emotions. The Mechanic’s Arthur Bishop is little more than a variation on this theme. But perhaps that’s not such a bad thing. The man does this well, so why not?

Donald Sutherland deserves a mention because he too, is amazing beyond words. And now on to Ben Foster. Foster is an actor who has recently become more noteworthy for me. This all started when I watched him in Pandorum (a science fiction horror fusion piece, really well done, and with Dennis Quaid) a few weeks ago. Only recently I have discovered that he actually played in 3:10 to Yuma with Russel Crow and Christian Bale. While that film is not really a favorite of mine, I loved Foster’s white leather jacket, a jacket that I have remembered to this day. I was excited to discover the connection. And of course there’s Foster’s little stint as Angel in X-Men: The Last Stand. It’s a small world. 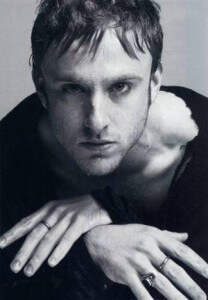 The Mechanic, despite the issues that I previously mentioned, is a really good movie for the simple reason that it takes a commonly used premise and makes it its own. And stars the likes of Statham, Foster, and Sutherland. It is definitely worth a viewing at the theater. A TV just can’t quite have the explosion impact of a theater screen.