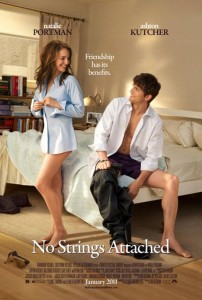 No Strings Attached is a romantic comedy that explores a more serious question than the typical “boy meets girl” venture. The central issue of the film is whether our two lovable main characters truly can have sex without all those prickly “relationship” issues.

Emma (Natalie Portman) and Adam (Ashton Kutcher) meet for the first time fifteen years ago in camp. Adam’s parents are going through a divorce and the emotionally awkward Emma offers him comfort. The movie then flashes forward through time and sees the dynamic duo meet up at various places and times. Finally, the film arrives in present day Los Angeles. Adam is frustrated at being a lowly TV producer’s assistant (whose writing no one in the ‘biz will read) and Emma spends lots and lots of time being a doctor at the hospital. Their friends with benefits relationship does not start until Adam’s girlfriend, Vanessa (Ophelia Lovibond), leaves Adam for his father (who just happens to be Kevin Kline), a famous actor of the olden days.

Distraught, Adam is encouraged by his manly friends to get over Vanessa by sleeping with someone else right then and there. Many alcoholic drinks later and Adam is still on the phone, calling every girl in his contacts list. He wakes up the next morning naked and hung over in the apartment that Emma shares with her friends from the hospital.

Ultimately the issue under scrutiny in this film is whether the two friends, the stable Adam, and the emotionally insecure and independent Emma, can transcend their purely physical relationship and be the couple of which the audience catches glimpses throughout the movie.

The movie delivers on its promise. It is funny and due to the R rating, the language reflects the subject matter, which is not all that common for the romantic comedy genre. Portman and Kutcher are believable in their roles as the two lovebirds and their timing with the witty dialogue is spot on. It is not a film that challenges your very morals (at least not in the eyes of modern society), but the “rom com” slot which No Strings Attached fills rarely every does. More importantly though, it is exactly what is expected of a movie of its genre, in all the right ways.

And of course, No Strings Attached has Cary Elwes as Dr. Metzner, though he says very little. Nevertheless, this fact alone makes the movie worthwhile.