Marcus follows in dear old daddy’s footsteps, having grown up with the shame of being the son of the man who lost the 9th Legion., and is determined to restore the said family honor through his military prowess. His plans don’t quite work out, though, and due to a severe injury to his leg, which manifested itself in a heroic, macho manner in a battle with British “heathens”, Marcus is honorably discharged from the military. Upon hearing that the lost eagle of the 9th has been spotted north of Hadrian’s Wall (the land that Rome was not able to conquer), Marcus sets out to find the eagle. Repeatedly told that no Roman could survive there, Marcus decides to take along his slave, Esca, played by Jamie Bell. The two go on a dangerous adventure together, each in search of something.


The Eagle is an adventure film that centers around honor, bonds, and things lost and found. Marcus’s father lost the eagle and Marcus sets out to find it. Esca lost his entire family to the Romans and he seeks his freedom. The two men do not see eye to eye, but as they journey together, they begin to understand one another and a strong bond forms.

Secrets are kept, secrets are discovered, and a lot of alcoholic beverages are consumed by the Seal tribe in possession of the eagle. But that last detail is mostly irrelevant.

The script writing is good, as is the acting, special effects, and fight choreography. If you are looking for a film that just downright looks good, you have found it. Inspirational message? Check. Channing Tatum in a lead role? Check. Historical accuracy? Ehh?

When it comes to movies, I do occasionally like to point out historical inaccuracies, but I would be lying if I said that I specialized in this time period. The only comments I can make on the subject are that Channing Tatum’s hair could stand to look more Roman. The costumes were good, but initially his hair made him look like a buff, modern man in a brass breast plate. 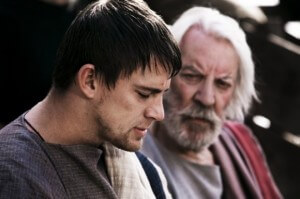 He’s probably thinking about his hair cut too. But wait! Who’s that in the background?!

His hair aside, there is also a flawed logic in his reasoning behind taking Esca along. At the time, Britain was filled with numerous tribes, each one having its own language. While Esca’s knowledge of the ancient Gaelic variant spoken by his tribe, would of course, be more than Marcus could understand, there is simply no way that he could communicate with such fluency with other tribes.

And those are the only negative things that can be said about the film. Other than that, it was exciting and fun to watch. As I’ve already stated, the film is inspirational and kind of made me want to go for a nice long run, since they did a lot of that in ancient Britain, it seems. So if you’re looking for a good action, adventure film, this is definitely on the list of ones to watch.

I could not, of course, finish this review without mentioning the fact that Donald Sutherland is indeed in this movie as Marcus’s paternal uncle (he too, has had to live with the family shame, but he owns a villa, so it’s no big deal). That man has been in so many movies that I just… don’t even have anything to say, other than the fact that it’s about time that he got his own star on that Boulevard in Hollywood.

Just chillin’ in the ol’ villa.

And yes, the tribal tattoos are hot.