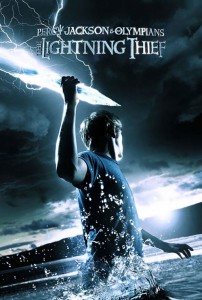 Percy Jackson and the Olympians: the Lightning Thief.

So I’ve decided to do a little metaphorical dumpster diving to take a look at some of the worst movies I’ve ever seen. These are truly the worst of the worst films that have ever made me mourn the money and time out of my life that I will never get back. First up to the guillotine is Percy Jackson.

There is really a lot I can say about the utter failure that was this Percy Jackson film (2010). The fastest summary would be to say that I wish I had never seen it and that I really want my money back, because, yes, I saw it in theaters. Considering the backward-looking nature of this particular review (or rant, take it as you will), and the others that will be dug up from the garbage pile, I will skip the usual synopsis.

Greek mythology is a rich source of story material but Percy Jackson takes it, twists it into some benign watered down, modernized version of it and completely kills an entire culture with its efforts. I generally don’t like books and movies about little children saving the world from utter destrucion (or in this case, a takeover by Hades, the god of the Underworld), so it already had that not going for it.

Add to that a summer camp that trains bastard god children for a completely unknown purpose in obsolete tactics like sword fighting in Spartan gear and a borderline incestuous relationship between Percy, played by Logan Lerman, and Athena’s daughter, played by Alexandra Daddario (technically they are half cousins), and you have a bad set up. Continue this train wreck with a magical road trip across the United States, of all places (’cause you know how much of the Greek mythology takes place there), and an attempt at a heartfelt exploration of parent-offspring relationships which are complicated by this little god business, and you have Percy Jackson, an uninspiring failure with completely predictable plot twists, disappointing cameos (not so much the who appeared, but why they would take the time out of their lives to do so), enough holes to suggest that the plot was shot by a shotgun from a respectable distance, and a cliché interaction between absentee god father and his angry son. And I’m pretty sure all of that was a grammatically correct sentence.

This movie is so full of daddy issues that one starts to wonder if the entire world is filled with sub par and dysfunctional family interactions. Percy hates his mom’s alcoholic boyfriend and his father is a fish that was never around (sort of, but whatever). His girlfriend has a superiority complex in order to impress her goddess mother (so really, it’s a mommy issue for her). And the main villain, who is not actually Hades, in a completely unsurprising plot twist, is evil because of his daddy issues. So really, they all just had unhappy childhoods and should be excused for their actions. Not really.

But then you can take a look a the real world and discover that it’s not quite screwed up to the point that is depicted in this excuse for a children’s feel-good film. I haven’t read the book this garbage is based on, but I feel bad for the author. A Harry Potter-like franchise, this isn’t.

Next up in this garbage heap: Ninja. 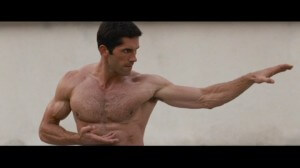 This movie is so terrible I could barely even find this still from it.