I walked along the piers, but could not see much in the dark. Certainly no sea lions, the biggest attraction in the area L. I walked past the entrance to the Alcatraz tours pier and wondered again who in their sane mind would want to visit a former prison as a tourist (especially after that great movie, â€œThe Rockâ€ â€“ we have all seen how that ended, hadnâ€™t we?!).Meanwhile, in the distance the Coit Tower was attracting my eye and Iâ€™ve decided to leave the piers and walk up to the tower. 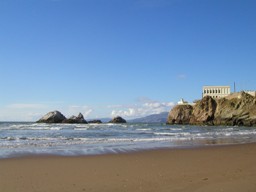 I did not have firm plans on what to do in San Francisco, so Iâ€™ve sort of followed the road, bypassing Presidio â€“ which in hindsight I really should have visited-and went towards the ocean to the House on the Cliff.
Its modern structure somewhat disappointed me and I was really surprised later when I learned that the house was built in early 1900s! I did not have much time before the museums would start to close and I did want to visit at least one of them that day, so I did not go down to the Camera Obscura, preferring a quiet lunch on the terrace with the view of the ocean. I am a big fan of clam chowder and the chowder in the House on the Cliff was one of the best I tried (or maybe I was just too hungry? J)

class=”MsoNormal” style=”MARGIN: 0in 0in 0pt”>In any case, after I finished lunch I was running a bit short on time as it was getting close to 3:30 and the Legion of Honor Museum that I wanted to visit could close at 5 for all I knew. I left the House on the Cliff, but I still wanted to get down to the ocean. There was a funny show down below, where people in what seemed two carts were roaming about on the shore, driven by the force of the wind in the parachutes attached to the carts. I forgot what those guys are called, there is a name for this sport, – but they were a great fun to watch! On top of everything else, I wanted to come down also to touch the Pacific Ocean again, for the first time in over 13 years. I am a bit sentimental in this way, I have to admitâ€¦ > 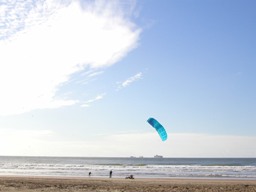 Leaving Monterey Iâ€™ve taken the Route 1 again on a whim and after about half an hour of driving in almost complete darkness I started to get a bit edgy. On my right there was the darkness of the ocean with occasional gleams of lights from the oil rigs, on my left I had the darkness of the mountains, occasionally pierced by the lights of solitary houses. There were not so many cars on the road anymore as it was after 8pm already and I realized that I might be needing a faster way to San Francisco if I were to make it to the hotel at some point of the evening.

About that time Iâ€™ve noticed a sign pointing in the direction of the Route 17 and remembered that my cousinâ€™s husband sort of mentioned that it is better to approach San Francisco by Route 17. Making another split second decision I took a turn to Route 17 and very soon started to get even more concerned. Route 17 was taking me through the mountain pass with a lot of twists and turns, where the speed limit was between 25-45 miles and the road seemed interminable. Moreover, I did not see many signs of inhabited areas as well and I began to wonder if I ever make it to that city where so many people seemed to have left their hearts. That opportunity for me seemed more and more distant at that momentâ€¦

However, by some miracle, around 10pm Iâ€™ve realized that I was getting close to San Francisco, all signs were pointing at that. Iâ€™ve entered the city on the last whiff of gas, almost missed the last exit before the Bay Bridge (which would have taken me to Oakland instead of my hotel and much desired rest) and somehow managed to find my way to the corner of Broadway and Van Ness, where I found my hotel, the Castle Inn.

are not the highest ones Iâ€™ve seen in my life â€“ Iâ€™ve been in the Alps and the Caucasus, where the peaks are towering at over 6,000 meters high and the crowns are always covered in ice and snow, sparkling blue under the sun. However, even small mountains, especially the ones facing the ocean, create an impression of something magnificently powerful and beautiful and they wonderfully break a monotony of the vast even space of the ocean. 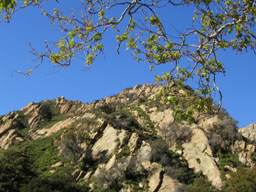 Meanwhile the road was taking me away from the ocean and into the mountains. I have stopped in a rest area on the way, where Iâ€™ve noticed a sign that this road was in the old times a part of El Camino Real, the Kingâ€™s Highway. 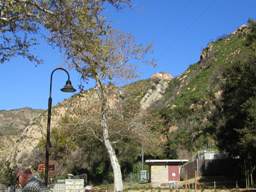 As the history goes, in the second part of the XVIII century there was a steady movement of the Spanish and Mexican settlers into the areas in the North, up to Sonoma County. El Presidio de San Diego was the first northern outpost, established in 1769, but in just about 10 years the number of the outposts greatly multiplied and reached out as far to the North as San Francisco, which started in 1776 as El Presidio de San Francisco and the name still remains in that area of the city. El Camino Real was a common name for the roads connecting these outposts together and I am pretty sure it looked much more exotic in those days! Nowadays itâ€™s just a normal highway winding its way sometimes alongside the ocean , sometimes through the mountains and it makes for the most part that famous â€œscenic routeâ€ attracting eager tourists like me.

In a sense this journey up North on the Highway # 1 was a sort of a pilgrimage for such a movie buff and a lover of Raymond Chandler and Dashiel Hammett detective stories like me. The names of the places around me were all too familiar â€“ Simi Valley, Mulholland Drive, Malibu, Ventura, the canyon roads featuring so much in the movies and in the old detective stories of the 30s and 40s, they sounded almost like Iâ€™ve been there before. Itâ€™s true I did not get much to see of the towns Iâ€™ve been passing by, but at least Iâ€™ve got a glimpse of what they look like now and I have to admit, thinking about that gives me a warm and fuzzy feeling.
[url=http://www.movie-corner.com/files/movie_critic_FEB2006_450sm1.jpg] 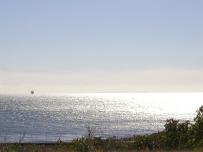